Email to Dutch ministry: Reverse the unfounded decision to terminate the subsidy to UAWC! 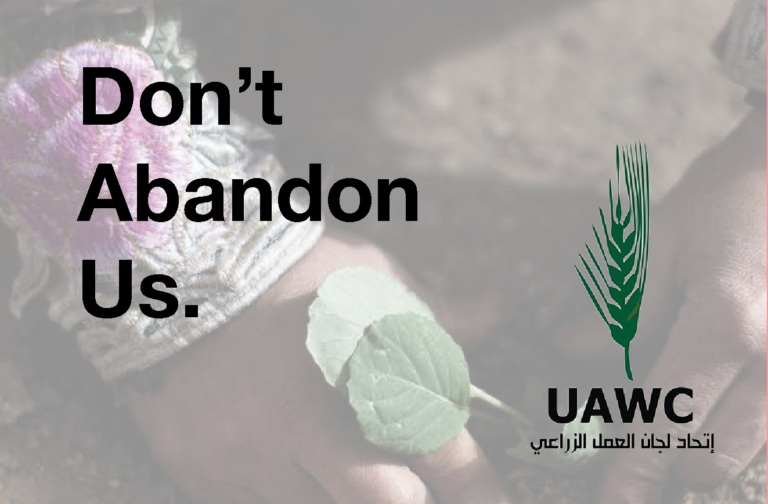 Join the e-mail campaign to protest the scandalous decision of the outgoing cabinet Rutte last Wednesday to end support for the Palestinian agricultural development organization UAWC!

Israel lobby organizations at home and abroad have for years put pressure on the Dutch government to stop subsidizing this important NGO, which provides technical and professional support to the Palestinian farming communities in the occupied Palestinian territory and which makes them resilient against Israeli land grabbing and colonization.

The alleged links of the UAWC with the PFLP (People’s Front for the Liberation of Palestine) were used as a pretext. It was already clear from the start that there was no real basis for this accusation, but the then Minister of Foreign Affairs Sigrid Kaag was persuaded to have a new investigation carried out.

This investigation, which was completed late last year, proved once again that there were no organizational and financial relations between the UAWC and the PFLP. . But what does the government say? That this research does show that individuals within the UAWC have ties to the PFLP! As if these individuals do not enjoy the right to freedom of expression, association and assembly in private…

Our cabinet is shamefully participating in the fallacy of terrorism that the Israeli occupying forces use as a pretext to make Palestinian civil society powerless in face of its policy of land grabbing, colonization and ethnic cleansing of large parts of the West Bank. The UAWC itself immediately issued a strong response to this last week, accusing our government of abandoning Palestinian society: http://www.uawc-pal.org/news.php?n=3615010&lang=2 .

Let the cabinet stop pleasing the Israeli occupier and colonizer by abandoning Palestinian society! Instead, let it really hold this occupier accountable by taking action against it, rather than against such a valuable Palestinian humanitarian organization! Write to the Dutch Minister of Foreign Affairs and the House of Representatives Committee for Foreign Affairs:

The unfounded decision to terminate the subsidy to UAWC must be reversed!

Dear Sir or Madam, I am writing to express my dismay at the Dutch government’s decision to terminate the subsidy to the Palestinian agricultural organisation UAWC. This decision is unfounded and even contradicts the government’s own investigation into possible links between UAWC and the PFLP.

The government’s apparent determination in the course of its investigation to find an argument to justify the decision, is shameful.By taking this decision, the government is providing ammunition for Israel’s assault on Palestinian civil society. Not only the other donors of UAWC, but also those of other Palestinian NGOs, will increasingly be vilified as ‘funders of terrorism’ and put under pressure. At the same time, the government’s capitulation to such pressure will be exploited by Israel in dismantling the six NGOs it put on its terrorism list in October 2021.

Palestinian NGOs play an indispensable role in limiting the damage that Israel’s occupation regime causes tothe Palestinian population. The offensive against the NGOs requires a sharp and principled counter-message. The Hague, the international Capital of Peace and Justice, has an exemplary role to play in this regard.

I urge you to put the protection of human rights that the Netherlands boasts of into practice. Give the Palestinian NGOs the support they need and do everything in your power to reverse this shameful and dangerous government decision.