There are two million people living in Gaza who have been collectively punished for eleven years with a blockade, because of being ruled by Hamas.

At invitation of the Dutch Gaza Flotilla Coalition, 37 civil society organizations and 90 well-known Dutch citizens (ex)-politicians, international law experts, scientists and artists) call on the Government to make every effort to ensure that the illegal Israeli blockade will be ended soon.

The call is issued in the context of the arrival of the Gaza Freedom Flotilla to the Netherlands. Coming from Scandinavia, the Freedom Flotilla, a convoy of four ships, will sail via Europe to the Mediterranean, after which it hopes to reach Gaza by mid-July. In the Netherlands, the ships will visit Groningen, Amsterdam and Rotterdam. The Flotilla aims to increase awareness of the blockade and mobilize support for lifting the siege that has been going on for eleven years now. Below is the Support Statement. See the Dutch version for the list of endorsements.

Statement of Support for the Gaza Flotilla 2018

A humanitarian disaster is taking place in Gaza. A disaster due to a blockade, in violation of international law, which the world has tolerated for 11 years now. Due to the blockade, an area one and a half the size of Texel is hermetically sealed off from the rest of the world via land, sea and air. Israel controls the borders and everything that can go in and out, leading to large shortages of all basic needs: clean water, electricity, construction material for housing, health care, and medicine. According to the United Nations, the area will be unlivable by 2020, but many think that that is actually now already the case.

We think the blockade must finally end. The Dutch government must argue for this in a European context. The Netherlands must also make every effort to ensure that the Flotilla, with its European ships and European passengers, is allowed through and that no one is harmed.
Israel’s blockade of the Gaza strip is illegal. The boats are sailing under Scandinavian flags. According to international law, Israel can not stop the boats on their way to Gaza.

Gaza needs our help more than ever. The current demonstrations in the context of the “Great March of Return” show that the population is desperate and feels they have nothing more to lose. The arrival of the Flotilla is the perfect opportunity to make clear to the Palestinians in Gaza that we will no longer leave them to their fate. Let us take this opportunity!

While the growing number of dead and injured from the “Great March of Return” in Gaza makes us more indignant and alarmed than ever, four ships are preparing for the new Freedom Flotilla to the besieged Gaza.
Four ships, two big ones from Oslo and Goteborg and two smaller ones, are sailing on May 20 from Malmo and Copenhagen via Germany (Kiel and Wilhelmshafen) to the Netherlands. The large ships expect to be in Amsterdam on June 1 and 2. A big reception awaits them there. The two smaller ships are sailing through inland waters, and will be arriving in Groningen on May 27 and 28, and in Leeuwarden on May 29. On May 31 and June 1 they will be in Amsterdam, and the following day on to Rotterdam. A number of new persons will step on board in the Netherlands. Afterwards the two big ships will go via England, France and Spain to Italy, where they will meet the smaller ships. Together they will go on to Gaza. They hope to arrive there on July 25 or 26.

It has been awhile since the Freedom Flotilla has made an attempt: in June 2015, one of the also then four boats, with Tunisian former president Moncef Marzouqi on board, was stopped. It is possible that this time as well the four ships will not get through the Israeli lines. But that doesn’t mean that the Freedom Flotilla has been for nothing. The most important thing is to generate attention for the hermetic blockade of Gaza.

Due to the blockade, since 2007 almost two million people are sitting behind fences imprisoned in an area that is about one and a half times the size of the island of Texel. Sometimes the border to Egypt is briefly open, but that is always only briefly. Fishermen can not sail further than six nautical miles, which is not enough for a decent catch. Moreover, they are often shot upon. Almost none of the youth in Gaza has ever been outside the area. Studying abroad is nearly impossible, so they usually have to pass on scholarships received. Goods can enter Gaza, but all materials that could be used for both civil and military purposes are withheld and confiscated. That includes construction material such as cement and steel, and everything needed to run machines or maintain infrastructure. The half destroyed electricity plant can thereby not be repaired.

Partly because of this, there is only four hours of electricity per day. For the same reasons, the sewage water flows untreated to the sea. The groundwater is 90 percent undrinkable due to intensive use and through salinization and pollution. According to the United Nations, the area will be unlivable by 2020, but many think that that is actually already the case.
Hospitals are not up to date. Staff can not be adequately trained and no advanced equipment is allowed into Gaza. Furthermore, due to its disagreement with Hamas, the Palestinian Authority no longer wants to pay for medicine and treatment. Out of the 11,000 houses totally destroyed by the Israeli invasion of 2014, only 1,200 have been rebuilt. The most damaged houses have never been adequately repaired. Many people have been homeless for years.

But that is not everything. Due to the years-long blockade and the vandalism from three extensive Israeli military actions, the economy is destroyed. More than 70% of the population is in the meantime dependent on humanitarian help, 47% is “food insecure” (needs food assistance). Unemployment is more than 40%, and for youth it is even around 60%. Gaza still exports somewhat: in 2017 an average of 218 truckloads left per month, more than during a long period before. But still not more than 21% of the average that was obtained before the blockade was implemented.

This man-made humanitarian disaster must end immediately, and therefore we support the mission of the Freedom Flotilla: the breaking and ending of the blockade! 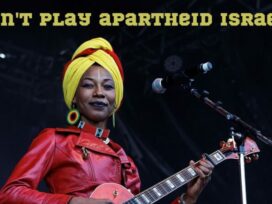 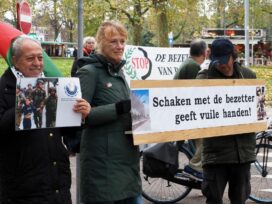 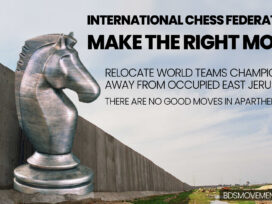